The Flavour of the Month

I used to think of June as the strawberry and mangetout month. Certainly they are two crops that are ready first in early June. But that was before my raspberry canes became established. Now the flavour of June is definitely raspberry! So far this month I have made raspberry jelly, raspberry lollies, raspberry ripple ice-cream and raspberry trifle. I have also put 3 lb of raspberries in the freezer to make jam. And with new raspberries becoming ripe every two days there is no let up in sight. And let's not forget that I still have raspberry cordial in the fridge from using up the last of last year's frozen raspberries a few weeks back.

Raspberry Jelly
3 tablespoons cold water
1 tablespoon or 1 sachet powdered gelatin
8 oz (225 g) raspberries
4 oz (110 g) granulated sugar
15 fl oz (425 g) cold water
Put 3 tablespoons of cold water into a small pan and sprinkle over the gelatin, then stir and set aside for 5 minutes. Put the raspberries, sugar and 15 fl oz of water into a large pan and bring to the boil. Leave the fruit to simmer for 5 minutes until soft then press through a sieve to make a puree. Heat the gelatin over a low heat for a minute or two until clear then stir this into the raspberry puree. Pour into suitable containers/moulds and chill for 2-4 hours until set.

Raspberry Trifle
1 pint (600 ml) of raspberry jelly (see recipes above)
4 trifle sponges
Raspberry cordial
1 pack of ready to make custard powder
Whipped cream or squirting cream
Decorations
Make raspberry jelly as shown in the recipes above. Place trifle sponges into the bottom of suitable containers and pour over enough raspberry cordial to cover (you may also like to add a splash of sherry). Allow the sponges to soak up the liquid and become mushy. You could also add a layer of fresh raspberries too at this point. Pour the jelly over the sponges and refrigerate for 2-3 hours until set. In the meantime, make up the custard as instructed on the packet and allow to cool completely at room temperature. Once the jelly has set, pour the custard over the top and level off. Return to the refrigerator for at least another hour. Add the cream and the decorations just before serving. 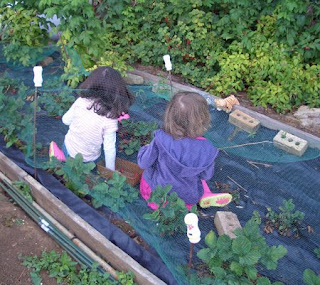 Despite netting my strawberries, pests still manage to get in and eat them!
Posted by Jammy Cow at 21:14