Hot (and spicy) in the kitchen!

Having grown up in a house where the only spice in the cupboard was ground ginger (for home baking purposes only) I still find it hard to eat and enjoy spicy food. Having said that, there was no garlic in my home as a child either but now that is an essential ingredient in my kitchen. I have slowly increased my tolerance for spicy food but you are never likely to see my in a curry house. My husband is much the same, although he enjoys a good dollop of mango chutney on a baked potato and will splash sweet chilli sauce on the occasional meal.

My husband's favourite version of mango chutney is the one with lime, which sadly is difficult to find in most shops. Knowing this, last year I found a recipe for lime chutney and thought this would make a good alternative. How wrong I was! I don't know whether there was a typing error in the recipe or something but it contained 4 limes, a variety of spices and no sugar. The next baked potato was rendered inedible by a dollop of this stuff on it. Not one to give up nor to throw food away, I decided to try to tone the chutney down a bit, first by adding sugar, and secondly by adding one and half pounds of pumpkin to it (nice and bland). And it worked. So this year with pumpkin to spare I popped down to my local Lidl's where you can buy limes at the moment for either 20p each or 5 for 50p (no brainer!). To moderate the lime flavour a little more I decided to peel two of the limes this year and use two more with peel and all. Of course, I need to wait 6 weeks for the flavours to mellow before tasting it as it should be but so far it seems to be a very promising chutney and a good one to use with Indian food.

Peel two limes and leave the others unpeeled. Finely chop the limes, onion and sultanas in a food processor. Heat the oil in a frying pan and cook the spices until they start to pop. Add the ginger and garlic and fry for 1 minute. Put the lime mix in a preserving pan, add the spices and 12 fl oz (350ml) of vinegar. Simmer until thick. In the meantime, peel and dice the pumpkin then cook in the remaining vinegar for about 30 minutes until soft. Stir the sugar and the lime mix into the cooked pumpkin. The chutney should be thick at this point but it can be simmered to reduce it further if necessary. Lade into warmed jars and seal immediately. 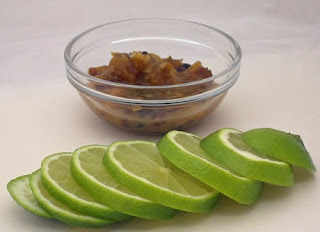 On a similar note, I decided that rather than buying sweet chilli sauce I should try to make some. We don't usually grow chilli peppers because they can be tricky without a greenhouse and because we generally don't like them. However, this year I was given some seed so popped them into pots to see what would happen. I grew them for several weeks in our conservatory with some tomatoes but put them outside in their pots when we went away on holiday for 3 weeks. We never did bring them inside again but amazingly they managed to ripen and there are still a few green ones on the plants.

Not being a huge fan nor connoisseur of chilli peppers I took a friend up on her offer to try one for me and she declared them tasty but not at all hot. With that established, the next step was to work out a recipe for sweet chilli sauce. I started by examining the ingredients on the open bottle in my fridge. This proved alarming as it seemed that 95% of what was in the bottle was sugar water, leaving room for some thickener and a bit of chilli and colouring. Then I examined the more expensive version of the sauce that was still unopened in my food cupboard. This one had a few more ingredients, including 11.5% plum paste but the only chilli in it was 1% chilli powder. So then I decided to google for a recipe (or at least some ideas) but this proved just as difficult as it seems that everybody who makes some has their own idea about what should go into it and how to make it. None the wiser, I returned to the bottle in my cupboard and decided to work out something based on that and the ingredients I had to hand - principally 4 oz of chilli peppers and some frozen plums.

So the recipe below is my version of sweet chilli sauce. I would say that anyone making a sauce like this needs to be fairly flexible with their ingredients because the strength of chilli varies enormously and so does our tolerance for them. Anyone wanting to add more heat to their sauce could add crushed chillies from a jar or chilli powder or cayenne pepper. If on the other hand you need to reduce the heat then cut the peppers open and remove the seeds and white bits inside the peppers as this is where the heat is contained.

Put the chopped plums in a saucepan with 2 oz (55g) of the sugar and 5 fl oz of water. Bring to the boil and simmer for a few minutes until soft. In the meantime, remove the stalks from the chilli peppers and roughly chop. Mix about 2 tablespoons of the water with the cornflour to make a white liquid. Once cooked, place the plums into a blender and blend until smooth. Add the chilli peppers and blend again to finely chop the peppers. Return this mix to the pan and add the remaining water, sugar, salt, paprika and lemon juice. Bring to the boil, adding the cornflour just as it starts to bubble, stirring as it goes in. Continue to stir it as it boils until it thickens. Ladle into warmed bottles and seal immediately. The sauce should keep well in the bottle until opened then keep refrigerated 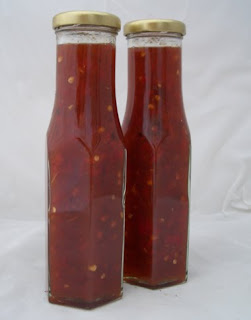