I went away on holiday last week and had a lovely time with the family on the south coast and Isle of Wight. We got back from holiday on Monday evening, feeling tired and hungry but pleased we weren't stuck in a foreign airport stranded by Icelandic volcanic dust!
I was pleased to see that my 5 tiny tomato seedlings had grown during the week and had survived a week without watering. The peanut seedlings had done well too and my hanging basket had burst into full glory of pink primulas - what a cheery site. 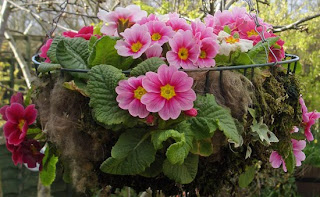 However, beyond the hanging basket I spotted my daughter's bike lying on the lawn instead of in the shed. Steve and I rushed outside and quickly discovered that the gate we had left bolted no longer was. We checked out the bike and could see nothing wrong with it and we looked around to see if anything else had been taken. All 3 of the other bikes were still in place, as were the abundant toys such as roller skates and scooters. Even the tools Steve had been using to make raised beds on the allotment were still there even though they were conveniently stashed in a highly portable bucket. We concluded it must have been children who had broken in, ridden the bike around and then left, and we considered ourselves fortunate.
I busied myself in the garden for a few minutes, watering the hanging basket and other container plants which were suffering after a week without rain. The leek seedlings in the cold frame were dry but still standing upright. Then it was time to make tea. Having been away for a week tea was to come from the freezer, only when I opened the chest freezer I discovered it was completely empty - not even a crumb left! Someone had stolen the entire contents of our freezer!
I stood there baffled for a few moments, racking my brain to think whether there might have been some kind of mistake, whether a friend or relative might have moved the stuff for some reason... all sorts of silly thoughts because the reality was just as weird. Now we realised that they had moved our daughter's bike out of the way just to steal the food. But why? Nobody these days is that desperate for food.
Our first thought was what we were going to have for dinner since our dinner had now been stolen so Steve, reluctantly after driving back from Southampton, drove round to the supermarket to get some things. As the minutes passed I remembered more and more of the stuff that had been in the freezer. Bags of chicken nuggets and frozen chips are really neither here nor there as they can be replaced but the homegrown and the home made food cannot and that is what was mostly in the freezer. Homemade ice-cream, pumpkin pancakes, leek & bacon quiche, stuffing balls, frozen soft fruit, a plum upsidedown cake... and on and on. When I told my daughter that her batch of mini pizzas she had spent 2 hours making had gone too she burst into tears!
I don't know what the thieves would have done with the food. I imagine that anything not in a branded packet and without cooking instructions would have been thrown away and yet these are the things that were so valuable to us. I went to bed that night feeling sad.
The next day I still felt bad about it and I stood at my kitchen window staring at the shed with a gutted feeling in my stomach. It was a beautiful sunny day and I shouldn't be feeling down so I went for a walk around the allotments to cheer myself up. Things here had grown too in the week we were away and stems of asparagus were poking out of the ground ready for picking. The purple broccoli was abundant too. It was nice to see things ready to harvest but I also enjoyed the signs of new growth - the teeny tiny apricots forming, the new stems of rhubarb, the first pea tips poking out of the soil. Later that afternoon when the girls got home from school were went around to the allotment and I watered the seedlings and harvested the broccoli whilst my eldest cut the asparagus and my youngest made a dandelion chain. 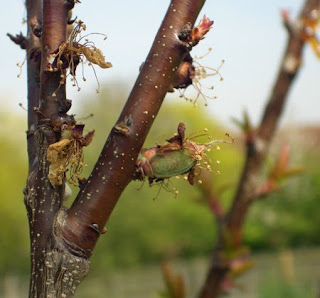 Over the next couple of days I remembered more and more of the contents of my freezer. By Wednesday I was ready to go shopping again to replace the easy stuff. It was weird having to do a weekly shop and buy something for every day of the week, knowing there wasn't just something in the freezer for tea on some days. I had to buy new storage boxes too as I had lost quite a few in the robbery.
I'm fortunate enough to be a positive person and I do tend to "make the best" in every situation and soon I was recovering and even seeing some positives. It was handy that they had stolen 4 tubs of "freezer coleslaw" that really hadn't worked out that well, and the homemade Cornish pasties that was missing a pinch or two of salt. And I had made rather more cubes of pectin than I had needed from last year's apple peelings so I didn't have to worry now about throwing those away. I am also pleased that I still have quite a lot of frozen fruit in Sue's freezer. Another plus is that right now I have plenty of freezer space. I had planned in January to have my freezer empty by June, I had just never imagined it would happen like this!
I started to replace the homemade food on Wednesday and I did a bit more yesterday and I was beginning to feel a bit better. Then at dinner time I got cross again whilst making crab cakes for tea because the recipe called for breadcrumbs and my handy bag of frozen crumbs had been stolen with everything else! I made fresh crumbs instead so wasn't defeated but it makes me cross that someone would steal something as "valueless" as a bag of frozen breadcrumbs. What annoys me more is that what was stolen won't have been appreciated for what it was - you cannot put a price on the time, energy and effort that goes into growing and making your own food and even when you try to steal it you fail to gain it's true worth.
Crab and Leek Cakes
Makes 5 (enough for 1 person)
1 small tin of crab meat in brine, drained
2 tablespoons mayonnaise
1 small leek, very finely cropped
2 sprigs of lemon thyme
Freshly ground black pepper
1 egg
2-3 slices of wholemeal bread made into crumbs
Oil for frying
Place the drained crab in a bowl and add the mayonnaise, leek, thyme and black pepper and mix well. Take handfuls of the mixture then dip it into the egg before coating it in breadcrumbs. Repeat until all the mixture is used and you have 5 crab cakes. Place on a plate and refrigerate for at least half an hour. Heat some oil in a frying pan then fry the cakes for 5-7 minutes, turning occasionally. Serve hot with chips and some sweet chilli dipping sauce. Not suitable for freezing.
Posted by Jammy Cow at 10:08