The Glory of Strawberries

I went away last weekend for the Bank holiday to visit relatives. It was only for 3 nights but I was anxious to get as many of the seedlings in pots out of their pots and into the ground as possible before going away. With a bit of time/task juggling I managed to get everything except the pumpkin and tomato plants in the ground before I left. It was, therefore, something of a relief that it rained on the Saturday and gave everything a good watering.
On return from the relatives on Monday afternoon I went round to check everything had survived their unsupervised transplantation. I was pleased to see that the brassicas had settled in well, that the sweetcorn was thickening up nicely and the cucumbers were still intact. I was surprised, however, that the asparagus had grown so much in the meantime. The stems were so long that I hated the idea of cutting them back so I decided it was time to let it grow on. Usually asparagus can be cut until mid June so it was a bit early and it did mean that for once we had no veg to harvest from the allotment. At times like that I'm glad there are shops to fall back on.
One of the things I really hate about buying fruit and vegetables from the shops is the way you can buy anything at anytime regardless of whether or not it is in season. Not only are there issues about food miles and so forth but it takes away some of the variety and excitement associated with eating with the seasons. I have a rule never to buy strawberries so that when they are in season and growing on the allotment they are really a very exciting treat. My girls, particularly, look forward to June when the first strawberries ripen.
Well, I broke my rule this week and bought 2 punnets of strawberries - they were at least new season British strawberries, so fairly close to being homegrown. The reason being I needed to trial a strawberry knickerbocker glory recipe before the World Cup starts next week. The recipe, "Knickbocker World Cup Glory" uses the classic combo of strawberries and cream to create a red and white recipe to represent the England flag. As I'll be making the recipe next week with six seven year olds in after school cooking club, I decided it would make sense on many levels to try it out when my youngest had her best friend over for the day. I'm pleased to say it worked well - the 3 girls had a great time making it and an even better time eating it!
Knickerbocker World Cup Glory
(Serves 2 to 4)
1 tin of strawberries in juice
1 sachet of gelatine
400g strawberries
125ml apple juice
80g icing sugar
50ml whipping cream
50ml Greek yoghurt
Glace cherries
Open the tin of strawberries and pour the contents into a pan. Bring to the boil and simmer gently for 2-3 minutes. In the meantime, put 2 tablespoons of water into a small pan and sprinkle the gelatine over then set aside. Drain the strawberries over a bowl then push through a sieve into the bowl. Gently heat the gelatine until melted then pour into the strawberry liquid. Leave to cool for a while then pour into a rectangular container and refrigerate for at least 2 hours until set.
Weigh out 200g of fresh strawberries and place in a blender with the apple juice and blend until smooth. Add the icing sugar and mix thoroughly until dissolved. Pour the strawberry sauce into a jug. Place the cream into a small bowl and whisk until it forms soft peaks then gently fold in the Greek yoghurt. Finally cut the jelly into small cubes. Now assemble the kickerbocker glory by layering together the remaining strawberries with the jelly, cream and strawberry sauce in tall glasses. Finish with a cherry on top. 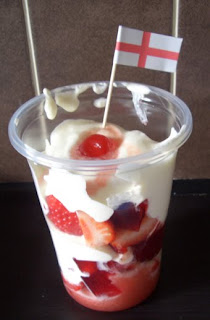 When I did this I gave the girls plastic tumblers with an England flag on the side and then made mini England flags from pieces of paper and cocktail sticks. Great fun!
After walking my daughter's friend back home we stopped off at the local hedgerow and picked some lovely elderflower heads then later that afternoon I put them into a bowl to steep with the sugar water and citrus fruit. The kitchen was soon filled with the unmistakable summery smell of elderflower and lemons. The next evening I strained and bottled it and Steve had the first try, making it up with fizzy water and a good dash of gin. He declared it a definite hit!
Elderflower Cordial
2lb 4 oz (1kg) sugar
1½ pints (900ml) boiling water
1 tablespoon lemon juice
1 tablespoon lime juice
about 15 large elder flower heads
1 lemon, sliced
1 lime, sliced
Put the sugar in a non-metallic bowl with the boiling water and stir until the sugar has dissolved. Add the lemon and lime juices. Wash and flick dry the elder flower heads then snip off the flowers into the bowl. Add the sliced lemon and lime. Stir then cover the bowl with Clingfilm and leave to stand for 24 hours. Scald a jelly bag and drain the mixture through it into a clean bowl. Funnel into sterile bottles then refrigerate.
Dilute to taste.
This weekend when we went out to the allotment what did we find? The first 3 ripe strawberries! Despite their Knickerbocker Glories earlier in the week the girls were still very excited about this and pulled each strawberry in half to share before running off to see if they could find anymore... a fruitless search (ho ho)!
Whilst they amused themselves in their strawberry hunt I pulled the autumn planted onions out of the ground. They have all bolted now so they aren't going to be particularly great onions and the ground can be better used for something else. I had just tossed the last of last year's stored onions in the compost bin so these new onions will at least fill the gap before the main crop ones are ready.
During the hunt for strawberries, the girls discovered the radishes were ready to pick. Not quite the juicy delights of strawberries but a useful crop nonetheless. So there I was thinking it was going to be a second week without fresh food from the allotment but instead we had 3 new things plus elderflowers from the hedgerow. And with the mangetout, peas and broad beans all flowering their socks off hopefully it is just the beginning of many weeks of homegrown food to come.
Posted by Jammy Cow at 21:41