Makes 5 jars
3 lb (1350g) plums
2 large oranges
8 oz (225g) sultanas
8 oz (225g) raisins
1 teaspoon cinnamon
1 teaspoon mixed spice
1½ lb (680g) granulated sugar
2 tablespoons brandy
Wash, stone and finely chop the plums and place in a non-metallic bowl. Grate the rind off the oranges then peel the orange and chop the flesh. Add the dried fruit, spices, sugar and brandy to the bowl. Stir well, cover and refrigerate overnight. Tip the mix into a preserving pan and heat gently, stirring to dissolve the sugar. Bring to the boil and simmer for about half an hour until thick. Pour into warmed jars and seal.
Apple & Cider Mincemeat
2 lb (900g) mixed dried fruit
1 lb (454g) apples
2 teaspoons ground mixed spice
1 pint (660ml) cider
2 tablespoons brandy
Peel and grate the apples and place them in a preserving pan with the mixed dried fruit. Add the spice and cider and cook for 10 minutes until the apple is soft and the liquid has evaporated. Stir in the brandy and pack into warmed jars and seal immediately. 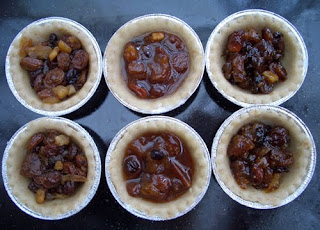 To make the pastry, sift the flour into a bowl and add the margarine (or butter). Rub the two together until it looks and feels like breadcrumbs. Add the sugar and mix in. Add a little bit of cold water at a time and start to bind the pastry. The pastry should form a ball that is not too sticky or likely to crack. Wrap in Clingfilm and refrigerate for about half an hour.
Preheat an oven to 220°C (gas 7). Roll out the pastry on a floured surface until about 5 mm thick. Use two pastry cutters to cut out bases and lids to fit your tin/cases. Place the base pieces in the tin/case then fill three quarters full with mincemeat (do not overfill or it will leak out when cooking). Use a pastry brush to brush milk around the rim of the base then press the lid on top. Make air holes in the lid then glaze with milk. Bake in the oven for 15 to 20 minutes until golden. Allow to cool for 5 minutes in the tin then transfer onto a cooling rack to cool completely. 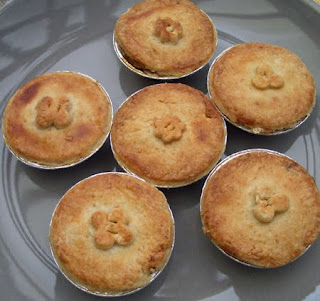 After all that my daughter was still keen to keep on baking so we made some gingerbread stars, also vegan with the use of vegan margarine, and a vegan chocolate log, using vinegar instead of egg. Then after a break for lunch we made popcorn. Believe it or not we grew the popcorn too! And what's more it was pink! I have grown a variety of sweetcorn for a few years now with the intention of making popcorn. It is a variety called "Strawberry" and it grows large, strawberry shaped cobs of hard red kernels. It is a bit tedious pushing the kernels from the cob but once done it can be popped like any other pop corn. It is nice, however, that once popped it retains some of its red colour. Once again, totally vegan and diabetic friendly.
I wrapped a gingerbread star and some popcorn in cellophane bags, tied them with some red and silver curling ribbon and popped them into her stocking. Better than an orange any day. 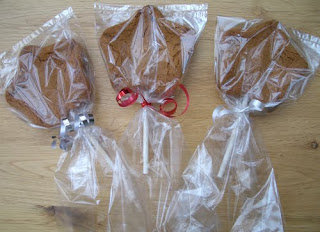 A final job was to put the remaining walnuts in a star shaped container that I saved from last year, along with some other nuts and dried fruits. Surely everyone should find something they like in there. 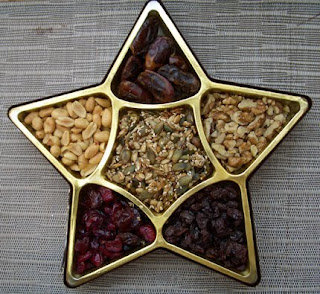