Phew, Christmas dinner is a big meal, isn't it? I switched the oven on just before half past 2 yesterday afternoon and we sat down to eat just after half past six. It started, of course, with stuffing the goose. Just coarsely chopped onions, sage, rosemary and celery for inside the bird and some of my apricot stuffing (defrosted from the freezer) for the crop. Fortunately, nothing more needed to be done for a couple of hours after placing the goose in the oven so I had chance to sit down and open a few more presents.

Later, it was time to get the roast potatoes on, along with roast parsnips. There was the added complication of the vegan meal for my step-daughter so I had to cook her some roast potatoes separately in sunflower oil. Also for her I did some roasted butternut squash. For that I retrieved a nice little one from storage, peeled it, deseeded it and chopped into into chunks. Then I tossed it in salt and pepper, crushed garlic and a little olive oil before spreading it out in the tin with her potatoes. They smelt so delicious when cooking that I decided to have some too and it was lovely.

Once the goose was cooked, it came out of the oven to rest for 20 minutes, allowing time to move the potatoes and parsnips up a bit in the oven to crisp and to cook the "trimmings" - stuffing balls and pigs in blankets, as well as the mushroom and walnut rolls. It also gave time to boil some carrots and to cook the Brussel sprouts. What beauties these were this year, I felt like a proud mother dishing up those homegrown baubles. 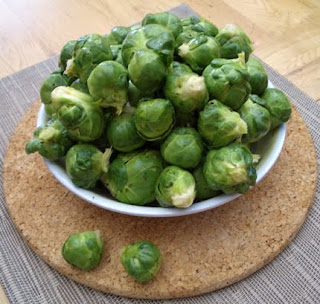 "Awesome", was the word used by my step-son to describe the meal, "lovely", said my mother-in-law, and all the plates were cleared. And after that I was glad I had put in the preparation to have a multitude of different desserts on hand to suit everyone's tastes. My mother-in-law wanted a mince pie so I asked her which type she wanted - plum & orange, apple & cider or figgy pear. And do you know what she said? "Can I just have a plain one?" You have to laugh! In the end she had Christmas pudding but I didn't mention it contained pumpkin! 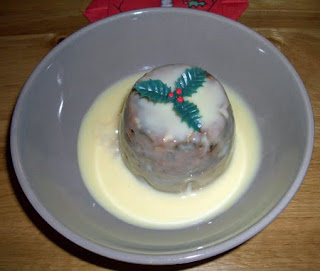 I have to admit, though, I went to bed feeling totally pooped!

Boxing Day was a chance to catch my breath. I started the day with a lazy lay-in and did little more with my day than playing with my girls, although we did spend a little time making snowmen shaped bread rolls out of a packet of bread mix ready for a cold buffet for tea. There was chance for a family bike ride in the afternoon to burn off a few calories and to build our appetite. So all the cooking that was needed was to boil some beetroot and to cook some sausage rolls, using up some sausagemeat stuffing that wasn't needed for the Christmas Day meal. After that, the most complicated dish was some seasonal coleslaw made from red cabbage, beetroot and red onion. Still, with lots of serving dishes, bowls and plates the dish washer was still as stuffed as the rest of us by the end of the evening! 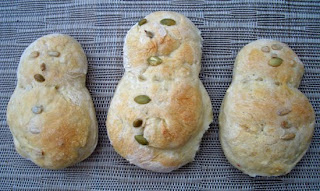 Shred the red cabbage and place in a bowl. Peel the beetroot then grate into the bowl then finely chop the onion and add that too. Mix the vinegar, oil, sugar and celery salt together in a jug then pour into the bowl. Finally, add the mayonnaise and stir until well combined and evenly pink. Serve immediately or store in a fridge for up to 3 days. 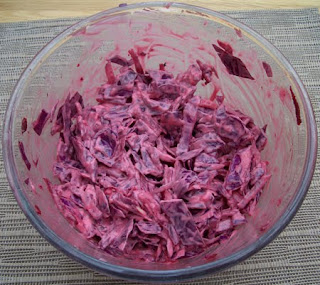