Having eaten all the Christmas leftovers it was time to take some meat out of the freezer and eat some "new" food in the new year. I started on New Year's Day with a tasty mixed grill using sausages and black pudding from the freezer and one of the 5 packs of bacon I'd ended up with over Christmas (I don't think that counts as leftovers because the pack was unopened and good till mid-January!). Then to go with that a perfect poached egg (Steve is a pro when it comes to poaching eggs so that's his job) and some beetroot rostis. For these I needed a couple of beetroot from the allotment and some of the potatoes I'd dug up on my last visit.

Beetroot Rostis (serves 4-6)
4 medium to large potatoes
2 medium beetroot
1 clove garlic
Seasoning to taste
Peel the potatoes and cut into large roast potato sized pieces then par boil for about 10 minutes (depending on your potato variety - I was using large Charlottes). Once cooked, drain and run under a cold tap to cool the potatoes down enough to pick them up. Grate the potatoes into a large bowl, using long strokes on the grater. Wash and peel the raw beetroot then grate into the bowl with the potato. Crush or grate the garlic into the bowl too then season. Combine well then mould into potato cakes. Place them on a floured plate, cover with Clingfilm and refrigerate for at least an hour. You could also freeze them at this point if desired. To cook, heat some oil in a frying pan then fry for about 5 minutes on each side. 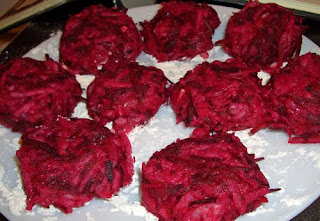 The rostis come out an amazing deep purple colour and taste great too, especially dipped in ketchup. On the topic of potatoes and leftovers, my mum likes to make bubble and squeak from leftover boiled or mashed potatoes and cabbage and at Christmas she makes it with leftover Brussel Sprouts too. It's simple to make, just mash the potato if necessary then stir in some cabbage (or similar) then mould into cakes and fry for 5 minutes on each side until browned. I haven't tried it but I reckon red cabbage bubble and squeak would look great too.
Yesterday it was time for the first roast dinner of the new year. I like to make a roast dinner every Sunday because it is one of those meal that everyone loves to sit down to and eat and it is also relatively good value for money, epecially as it is usually possible to make more than one meal from the piece of meat. In the middle of summer cooking and eating a roast dinner can be a bit of an ordeal, although the lovely fresh summer veg is always a delight. But at this time of year it is just what you want to eat - filling and warming - and the seasonal veg just suit the meal so well.
So yesterday afternoon I went round to the allotment to dig up some more potatoes. I took my youngest with me so she could practise riding her bike without stabilisers ready for the school run on Monday morning. As she rode up and down I lifted off the top frozen inch of soil and dug up some potatoes from underneath. It didn't take long but sadly my daughter's bike suffered a puncture and I had to spend the next three quarters of an hour in the freezing garden, struggling with half numb fingers to fix the 4 holes in her inner tube. That's almost enough to wreck an Sunday afternoon!
After warming myself with a bath, it was time to make the Sunday roast. On this occasion I had chosen a piece of lamb rolled shoulder. Whilst the oven was preheating to 180°C, I stabbed the meat and poked slices of garlic and sprigs of fresh rosemary into it. Then I made up a bit of English mustard and smeared this over the ends before putting it into the oven. It was then time to prepare the potatoes. First I spooned some goose fat into a tin and put it into the oven to melt then I peeled the potatoes and cut them into large pieces then I par boiled them until they were just going soft around the edges. In fact, just as I put them on to boil I peeled a parsnip and cut that into large chunks too and threw them into the water with the potatoes. Once drained, I put the lid back on the pan and shock it vigorosly to fluff up the edges of the potatoes. I then tipped the lot into the tin of hot goose fat and used a large spoon to turn them over until they were evenly coated in the fat. Once these were in the oven I prepared some chunks of butternut squash and crushed garlic and put these in to roast too. Finally, I peeled some carrots and cut them into large lengths. I placed these on a drizzle of olive oil on a piece of foil then sprinkled over a pinch of five spice powder and wrapped the foil around them to make a bundle. This too went into the oven. With dinner cooking nicely in the oven it gave me an hour to get on with other things, such as the necessary prepartions for the return to school and work.
With all the mince pies and Christmas cake eaten I needed to think of some other treat for the lunchboxes. This is when I realised I hadn't in fact finished with the Christmas leftovers at all because both cranberry sauce and mincemeat make perfect easy flapjacks.

Preheat over to 190°C (gas 5). In a large saucepan, gently melt the butter with the syrup. Remove from the heat then add the remaining ingredients. Spoon the mixture into a small tray and press down with wetted fingers. Bake for 20-25 minutes. Cut into flapjacks before allowing to cool in the tin.

Preheat over to 190°C (gas 5). In a large saucepan, gently melt the butter with the mincemeat. Remove from the heat then add the remaining ingredients. Spoon the mixture into a small tray and press down with wetted fingers. Bake for 20-25 minutes. Cut into flapjacks before allowing to cool in the tin.

After an hour the meat was cooked (it wasn't a particularly big piece), so I took it out to let it rest. I turned the oven up to 220°C and move the veg to the top of the oven to crisp up. Then I just needed to make some gravy from the meat juices and stick in some ready-made Yorkshire puddings for my girls before everything was ready to serve. Whilst we sat down to eat the flapjacks cooked in the oven and after the girls were in bed they were cool enough to wrap up to add to their lunchboxes. Cheeseboard cheese sandwiches for one, pate for the other... maybe Christmas isn't quite over yet. Actually, it was time then to iron the school uniforms... definitely the end of Christmas!
Posted by Jammy Cow at 11:16