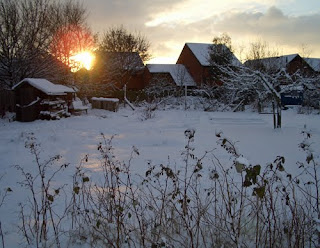 The snow reached Milton Keynes during Tuesday night and by Wednesday morning it lay thick on the ground. After getting the girls up and dressed as usual I discovered their school was closed so rather than rushing breakfast I decided to do something a little more interesting. I had a couple of bananas in the fruit bowl that had passed their best so I decided to experiment to see if I could substitute them with the usual pureed pumpkin in my pumpkin pancake recipe. What a result! They were delicious.
Banana Pancakes (makes 16)
250g plain flour
1 1/2 tsp baking powder
1/2 tsp bicarbonate of soda
55g light brown sugar
3 eggs
284 ml carton buttermilk
A few drops vanilla extract
2 over ripe bananas, mashed
4 teaspoon sunflower oil
In a large bowl, sift together the flour and raising agents. In another bowl, mix together the sugar, egg, milk, vanilla extract and banana and oil. Make a well in the centre of the flour and gradually mix in the wet ingredients until a batter forms. Heat a little oil in a frying pan and add 60ml (2 tablespoons or 1/4 cup) of batter at a time. Cook until the base is set then flip and cook until the second side has set and browned. Either serve hot with whipped cream, or cool on a wire rack and freeze for use later.
With a warm breakfast in our bellies it was time to go and play in the snow. The allotment is the best place for this because nobody else goes there when its snowing so we get virgin snow to ourselves. It also has a useful collection of tools and things to use to decorate snowmen - assuming I can find these things under the blanket of snow. So after the usual excited running around the girls set about building a snowman or two. Then before leaving I thought I might as well harvest a leek. Fortunately, I could remember where I had left the knife because I knew there was little hope of just pulling one out of the frozen ground. Sure enough a tug proved that the leeks were firmly stuck. Instead, I dug down to find the soil and sliced one off at ground level with the knife. 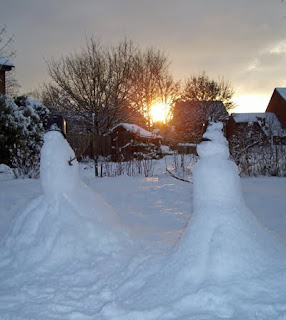 Back a home the girls continued to play in the snow in the garden whilst I made some soup for our lunch. Since Christmas I have become a fan of roasted butternut squash so I wondered if this would make a nice soup. I still have 4 squash left in storage so I need to get on and use them before they go over. Making soup is certainly more time consuming than opening a tin but it is very satisfying and the girls came in all pink and soggy just as I was ready to blend the ingredients into soup. So I soon had warm soup ready to thaw them out.
Roasted Butternut Squash Soup (serves 4-5)
600g butternut squash, yielding about 450g once prepared
1 clove garlic
Olive oil
1 onion
1 carrot
1 potato
1 red pepper
Water
100g red lentils
1 bay leaf
Salt and pepper to taste
Preheat oven to 200°C, gas 6. Peel and deseed the squash and cut into chunks. Place in a bowl and add a crushed garlic clove, a glug of olive oil and some salt and pepper. Toss the squash until evenly coated then place in a tin and roast for 30-40 minutes until soft and just beginning to brown along the edges. In the meantime, peel the other vegetables and chop. Pour some more olive oil into the bottom of a large saucepan then fry the carrot, onion and potato for about 5 minutes. Add the red pepper, roasted squash, lentils, bay leaf and about 1 pint (660 ml) water. Bring to the boil then simmer for about 30 minutes, stirring and checking the water level about every 10 minutes. Note that as the lentils cook they will absorb the water and will stick and burn if you don't add more water. Don't, for example, let yourself be distracted by children coming in from the snow! After 30 minutes remove the bay leaf, add more water (cold) if necessary then allow the soup to cool enough to blend it in a blender. Return to a clean pan, check and adjust the seasoning then reheat to serve or ladle into warmed jars and seal immediately.
After lunch the girls decided they were bored with snow so whilst they settled down to watch television under blankets for a while I made some fish pie ready for dinner. I had planned to do this when I'd picked up a pack of "fish pie mix" fish in the supermarket for £2.99 the day before. This was 320g of pieces of fish - salmon, cod and smoked haddock for £2.99. With enough fish to make 4 individual pies, that works out about 75p per pie. The pies can be either eaten fresh or frozen for later and at this time of year it is a good way to preserve some potato before the potatoes start sprouting again.
Fish Pie (serves 4)
1lb 8 oz (700g) mashed potato
2 carrots1 clove garlic
2 cm root ginger (or 2 shallots instead of garlic and ginger)
1 sachet miso soup making 160ml (or fish stock)
4 fl oz (110 ml) white wine250ml single cream (or soya alternative)
1 oz (25 g) butter
1 oz (25 g) flour
320 g fish pie mix
Sprigs lemon thyme (or parsley)
Grated Cheddar cheese
Two slices wholemeal bread, crumbled
Black pepper
Make the mash potato in your usual way and leave to cool. Peel, finely chop and cook the carrot until tender then leave to cool. Peel and chop the garlic and ginger then fry in a little oil for 2 minutes. Pour in the wine and heat for 5 minutes until reduced by half. In the meantime, make up the miso soup then dilute with 140 ml water. Add the soup and 150 ml of cream to the wine and heat for 10 minutes until reduced by half. In the meantime, make a roux by melting the butter in another pan, stirring in the flour and gradually pouring in the remaining cream. Pour the soup mix into the roux and cook for 5 minutes until a thick, smooth sauce is made. Leave to cool completely. When everything is completely cool assemble the pies in 4 individual dishes or foil containers. First divide the fish mix evenly between the dishes then sprinkle over the lemon thyme and carrots. Pour over the sauce and stir. Layer over the mashed potato and level. Sprinkle over the cheese then the breadcrumbs and finally grind over black pepper. The pies can now be frozen. To cook, thaw completely then bake at 200°C, gas 6 for 20-25 minutes until hot through and golden. Serve with seasonal vegetables.
It had been a bit of marathon day in the kitchen and I was tired but we had 3 lovely warm meal inside us and with no sign of things thawing I figured there would be no school run to rush out of bed for in the morning.
Posted by Jammy Cow at 22:05