Is life too short to stuff a mushroom?

This week saw us pass through the 1 month to Christmas mark and finally the weather has turned a little nippy. Amazingly, however, we have yet to have our first frost here in Milton Keynes. Last year frost came fairly early in October and I was caught unawares and this lead into what I would call a "proper winter" with snow on the ground for a fortnight. This year I certainly won't be putting a bet on for a white Christmas. We could do with a bit of a cold snap to kill off some of the bugs that would otherwise be ready to infest the plants next year.
With Christmas looming large on the horizon I decided to make some stuffing balls to freeze until the big day. It also provided a useful way to use up some cut pumpkin I had in the fridge.
Christmas stuffing balls
3 slices of bread made into breadcrumbs
5 oz (150g) pumpkin
3 oz (85g) dried apricots (plus a few extra)
A sprig of sage
8 oz (225g) sausagement
4 ish mushrooms
Salt
A dash of nutmeg
Freshly ground black pepper
Cut up the pumpkins, apricots and sage in a food processor then add the rest of the ingredients and whizz again until combined. The mixture can now be frozen for use in the crop of the bird or it can be rolled into balls and placed on a tray for freezing. Before freezing, add a third of a dried apricot to the top of each ball for decoration. Cook at 180°C, gas 4 from thawed for 25-30 minutes or from frozen for 35-40 minutes. 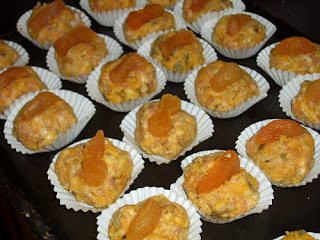 Last week on a whim I brought a bag of rocket, water cress and spinach whilst in the supermarket and we made a couple of salads out of it. Then this week, after the bag went past its best I decided to nip to the allotment to see what leaves we had left. With no frosts to damage them I had quite a few to choose from but in the end I just grabbed a big bunch of 4 different types of lettuce and a couple of beetroot. When I dished up salad for tea again my husband thought nothing of it but was somewhat surprised when I told him that the leaves had comes from the plot rather than a poly-bag. With it we had some of the beetroot and some tomatoes from the line across the conservatory. I'm truly staggered how well those tomatoes have kept. Good grief, it's almost December and we are still eating fresh homegrown tomatoes!
Salads aside, now is time to really get stuck into the joys of autumn and winter veg. My brussel sprouts are amazingly plump this year but I shall save those for Christmas. I'm not sure what we did right this year with them - probably made sure the soil was nice and firm around their roots. But now is the time to eat leeks, cabbage, and baked potatoes. Actually, speaking of baked potatoes I had a lovely one for my lunch today. It was an overgrown Charlotte as it happens but I decided to bake it anyway then I dolloped a couple of spoonfuls of pasta tomato sauce and some grated cheese on top. Baked potato, pizza style... yummy! Bring on the lycopene too!
Earlier in the week I turned 4 large flat mushrooms and a leek into a meal for two by making stuffed mushrooms. I have been told that Delia Smith once said that life is too short to stuff a mushroom. I don't know whether she did but I certainly don't agree. It is dead easy and really tasty.
Stuffed Mushrooms
4 flat mushrooms
1 leek
1 clove garlic
Grated cheddar cheese
8 rashers of streaky bacon
Preheat oven to 190°C, gas 5. Pull the stems off the mushrooms and finely chop them. Chop the leek and the garlic. Fry the mushroom stems, leeks and garlic together until softened then spoon this mixture equally into the 4 mushrooms. Scatter over with cheese if desired. Then place each mushroom on a cross made from two bacon rashers of bacon and bring the bacon up to meet in the middle of the mushroom. Bake for 20-25 minutes until cooked. Serve hot with potato cakes and salad.
Posted by Jammy Cow at 22:26