I keep thinking next week will be less busy but I have been thinking that for weeks now and there's no sign of a let up. Next week I have the first craft fair of the season so I have been busy preparing my preserves for that. Despite the fact that I have been steadily making jam and chutney every week since the summer I still have quite a bit of frozen fruit in the freezer and marrows in storage. Last week I was invited to a selling evening at a friend's house. Originally I was invited just to be a customer but I asked if it would be OK if I brought some jam and chutney sample jars over for people to have a taster. So this focused my mind and I spent the days beforehand preparing, printing and sticking 660 labels on 330 jars! I decided that as well as a sample of every preserve I make, I would also take two jars of each as stock should anyone decide to buy some on the night. This turned out to be two boxes of jars simply because I make such a huge variety of different preserves. I don't usually take samples when I run a stall at a craft fair because I usually have so many heavy boxes to carry as it is that I don't want to lug another box along (full of stuff I can't sell). I have, however, occasionally been asked if I have a taster so I thought this particular evening would be a useful experiment to see how useful taster jars are.

On the night itself I put out the sample jars, labelled roughly with handwritten labels, and the hostess provided some pieces of French bread to try the preserves on. I had also made some mini pastries with plum and cinnamon jam for people to nibble on. So I found myself in the kitchen, chatting away to the 10 or so other guests at the party about my preserves. But how did the sampling go? Well, bizarrely nobody tried any of them! All the pastries went but no one got as far as spreading a preserve on a piece of bread. The closest we got was a couple of people who took a lid off and sniffed. But far from the evening being a failure, I sold £37 of preserves. It just goes to show that people aren't particularly bothered about tasting the product, they just go on the sound of the name of the preserve and the description on the label. This is particularly true for preserves bought as presents.

Wash the plums, cut in half and remove the stone. Put the plums in a preserving pan with the water and the cinnamon sticks and cook for 20 to 30 minutes until soft and pulpy. In the meantime warm the sugar. Once the fruit is cooked, add the warm sugar and stir over a gentle heat until completely dissolved. Bring to the boil and heat rapidly for 10 to 15 minutes until the setting point is reached, stirring occasionally. Skim off any scum and remove the cinnamon sticks. Then add the ground cinnamon and ladle into jars and seal immediately.

Grease a baking tray and preheat oven to 200°C, gas 6. Roll out the puff pastry into a rectangle. Smear the jam all over the pastry and scatter on sultanas. Roll the pastry up then cut the roll into 1 cm wide pieces. Turn the pieces on their side and place them on the baking tray then cook for 10 to 15 minutes depending on their size until risen and golden. Eat the same day.

Anyway, having got all the jars labelled for that evening, it was time to return my attention to the fruit still in my freezer, especially with Christmas approaching when my freezer needs to be used for other things. So since then I have made tayberry, blackcurrant and liquorice, and raspberry jams and redcurrant jelly. Of course, now I have a few more jars to label before the craft fair on Thursday.

And with Christmas in mind I spent a day this week making Christmas pudding and Christmas cake. My husband asked if I'd make another pumpkin and ginger loaf as he had enjoyed it so much so I cut into one of my mini pumpkins for this. Despite making the cake there was still pumpkin left so I decided to sneak a little of it into the Christmas pudding! I'm sure no one will ever know. I still have some of that pumpkin left over and I have a few ideas how else I might hide it in the Christmas fayre. But in the meantime I chopped some up and put it in the stir fry we had on Friday night. That turned out to be a delicious meal, helped, it has to be said, by the addition of my home made sweet chilli sauce. Tonight's dinner was less exotic, just fish in batter, but I did pick 5 French beans from the plant growing on the windowsill which added a welcome freshness to it.

Mix all the dry ingredients together except the baking powder then combine with the eggs and ale. Cover and leave to stand overnight. Bring a large pan of water to the boil then stir in the baking powder and transfer the mixture into the pudding basins. Cover each pudding with a piece of cloth, tied with string. Boil for 5 hours. To serve, reheat in the microwave for about 1 minute and serve hot with custard and/or cream.

Stir fry the steak and vegetables until cooked then add the sauces. Serve immediately with rice and prawn crackers. 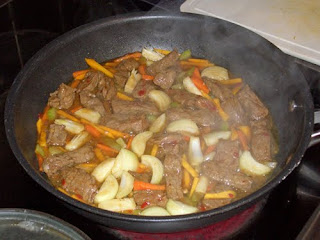 Also this week I got round to pureeing the tomatoes from my tomato chandelier. In a way I was reluctant to see it go but I decided to leave the line of tomatoes across my conservatory for the time being to eat fresh and because they look so pretty! It was nice this lunchtime to be able to just reach up and pluck a ripe tomato from the line. My husband said we could almost pretend we were sat on some Mediterranean patio somewhere, picking fresh tomatoes straight from the vine. That would have been fine had it not been for the clattering of rain on the roof and the howling of a gale but fortunately I do have a particularly good imagination!
Posted by Jammy Cow at 22:25